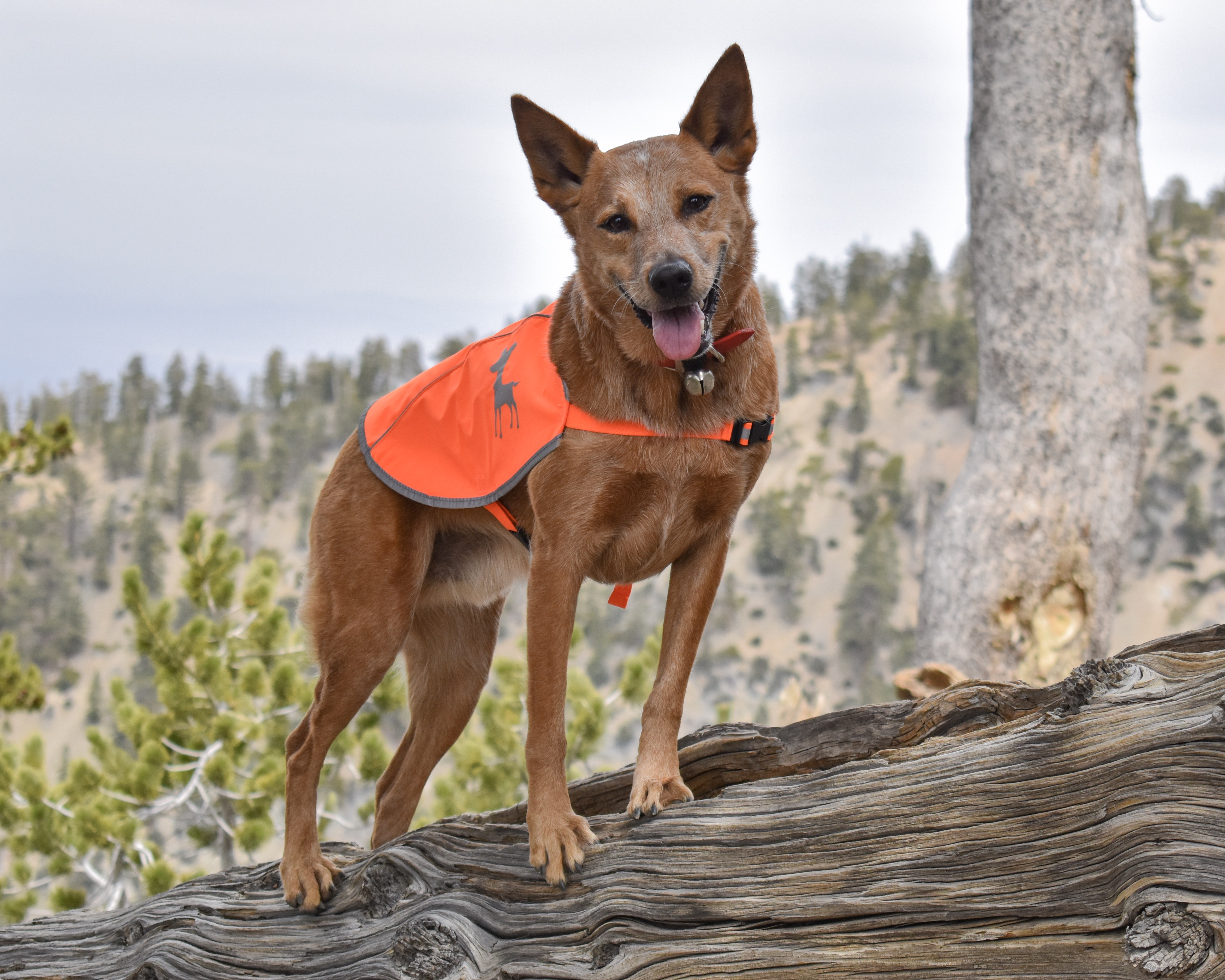 Unlike dogs, humans’ initial interaction with the world at large is through our sense of sight. But even with sight being our most dominant and relied-upon sense, how often do we miss things? Even if we’re specifically looking for something we can have a hard time: “eye spy” game anyone? So it’s interesting to think about how often we overlook – pun intended! – the visibility of our canine companions, especially in terms of their safety.

My own dog, Redford, blends into almost every natural outdoor environment other than snow. Somehow he can be five feet away from me and I can still miss him. This might be because he has no solid patches of fur on his coat to easily contrast with the environment he’s in, or because his dusty red coat blends in with dead pine needles and dirt like he’s wearing a ghillie suit. As a Wilderness Search and Rescue dog Redford works to locate missing people off-leash through very large areas and being off-leash is when safety and visibility are most important. Even in urban areas, it’s the off-leash dogs who are most often hit by cars – rarely do on-leash dogs suffer such misfortune. So whether you and your dog live or hike in urban areas, the wilderness, or in between, let’s talk safety and visibility!

When you’re hitting the trial it’s important to know where your dog is and there’s a lot of gear out there to help you depending on where you’re hiking. To make your dog more visible you could add lights (clip on lights, light up collars, etc.) or clothing (bandanas, vests, harnesses, jackets, etc.). If your dog is a far and away explorer when off-leash you could add something audible like a bear bell for when you cannot see them. Since you most likely found this article through our friends at Dogs That Hike, let’s discuss visibility for safety while hiking first, because wouldn’t we all rather be hiking with our dogs right now instead of reading about it?

When I hike for fun with Redford he always wears three things, no matter what: a waterproof, heavy duty collar, a bear bell, and a light attached to his collar. The heavy duty waterproof collar so he can run around with a collar that will last through the backcountry and keep its integrity even after it’s soaked from running through creeks and swimming in lakes. The bear bell has two functions: to let me know where he is when I can’t see him and to alert other people and animals of his presence. Knowing where your dog is while they’re off-leash seems like a no-brainer, but too often I’ve seen other hikers unclip the leash and immediately forget that their dog was just on the other end; you should always know where your dog is. I can’t stress that enough, in the woods or in a park, their safety falls on you – they’re the dog living in our human world. It is so important that you not only equip your dog with important trail skills but you also train your dog for the trail and follow hiking etiquette.

When a dog is off-leash you have far less control over who or what they come into contact with. The bear bell helps give them a bigger buffer zone since other hikers can usually hear it before they see it. The same goes for other animals – it’s not called a bear bell for nothing. Most wild animals will naturally avoid contact with humans and their domesticated furry comrades, but only if given due warning. Like dogs, bears have far better hearing than humans and usually hear us before they see us. While the effectiveness of actual bear bells for deterring bear encounters is somewhat inconclusive (see https://www.backpacker.com/news-and-events/do-bear-bells-really-work ), every ranger and backcountry hiker will tell you that making any noise at all will help you avoid unwanted encounters with animals. More novel sounds like the human voice, music, or a small airhorn would better help deter animal encounters, but also kind of ruins the mood for most of us who hike for connection to nature. A bear bell is a cheap, easy to use option that can’t hurt… and I can’t be the only one who wants to err on the side of caution when talking about a chance encounter with a predatory animal!

I always make sure that Redford has some light on him on our hikes. In the past, I’ve exclusively used Nite Ize’s “Spotlit” LED carabiner lights the most. I use a red one on his collar and two white ones on his search vest for not only for redundancy, but because it makes him look like Rudolph, but I digress! The carabiner lights are bright, easily attachable/removable, and are weather resistant. I’ve started to use their new “NiteHowl” LED safety necklace on hikes as well as for Search and Rescue and it’s great for nighttime visibility. In low light it’s not quite bright enough to really be seen, say if you want to use it for a dusk walk, but for after dusk adventures it has good all around visibility – as long as your dog doesn’t have very long hair that will cover the collar. It’s a cut-to-fit collar making it easy to size to your dog. However, it doesn’t have any identification or leash attachment points and is thus meant to be worn in addition to a collar that has identification and can bear the tension of a leash. Its sole purpose is nighttime visibility. One option we didn’t test are light up collars (such as Head-Lites, previously reviewed on Dogs That Hike) that offer a leash attachment point.  Finding one that is bright enough and tough enough would eliminate the need for dual collars.

Another great option is the Ruffwear “Beacon” waterproof light. It’s an easily attachable/removable light that is a little larger than Nite Ize’s carabiner light, is waterproof, and has three color and pattern options all in the same light. It also has two collar attachment options, one being that it can also clip onto a harness and the battery is rechargeable with an included USB cable. The Ruffwear Beacon has a visibility range of 2,500 feet which sounds too good to be true, but since Nite Ize doesn’t list how far their carabiner lights are visible, it seems there’s literally no comparison!

While doing Search and Rescue, Redford always wears a vest for identification and visibility. It’s a general rule that the Wilderness/Area dogs wear bright/high-visibility colored vests since they work off-leash, far from their handler, and in any weather conditions. Redford looks particularly good in hi-vis orange so this all works out! Apart from his Search and Rescue vest though, I’ve been considering more and more his general visibility when we hike, camp, and backpack. Like I said earlier, he blends in pretty well, but he also is the general size and stature of a coyote and we have come across hunters on the trails in the backcountry. Although, I would think anyone could tell Redford apart from a coyote immediately, I shouldn’t assume that a hunter could, especially under the pressure of an active hunt when a hair-trigger can be advantageous. I want Redford to be immediately discernible as a domestic dog and have started incorporating hi-vis garments when we do long, lightly trafficked trails where we might be the only other non-game beings a hunter encounters. The fact that I could also incorporate these hi-vis articles into our Search work is an added bonus!

You can find almost any accessory for your dog in a hi-vis color. I have the Hurtta Extreme Warmer in hi-vis orange and also their Slush Combat Suit in an orange pattern. These both come in handy when hiking or camping as Redford can wear the Warmer around camp at night and to sleep in when the temps get low. That and the Slush Combat Suit can both be seen in low-light and low-contrast environments like when it’s snowing or raining when visibility is lessened. Hurtta items are extremely well made and as such can run a little more expensive, but are a good investment. If you’re looking for some more budget friendly hi-vis items, Alcott Adventures makes some great options like a hi-vis bandana and vest, both of which have reflective trim and are adjustable to your dog’s shape and size. It should be mentioned that you should always consider the weather and temperature when putting any piece of clothing on your dog. If your dog has a thick double coat, it’s not a good idea to put a thick vest on them if you’re hiking in warmer weather. Instead look for a mesh vest/harness or one that is specifically breathable. You don’t want to risk giving your dog heatstroke just to have them be more visible.

Living in Los Angeles, I exclusively use my hi-vis items, lights, and bear bells when we’re out of the city hiking, searching for missing people, camping, or backpacking. But, that’s not to say that you might not find any of these items useful in an urban environment. A hi-vis jacket, bandana, collar light, or light-up collar could be used if you go running with your dog. Many of my friends walk or run their dogs at night once they get home from work and the benefits of being more visible at night should need no explanation. Also, if you have a smaller dog, hi-vis items or lights can work wonders in a busy, city environment. They can greatly benefit from the added visibility that helps them not get stepped on while walking a busy city sidewalk and keep the independence of walking instead of being carried.

More and more people have dogs these days and even more of us are taking our dogs with us on daily activities and adventures. But that doesn’t mean that everyone is always looking out for a dog or even notices one. Making sure that our dogs are safe in any environment falls on us and taking a little time to address that can make all the difference no matter where you go together!

About the author: Cait and Redford are based in California and enjoy spending their free time adventuring.  Redford is in training to become a Wilderness Search and Rescue Dog with CARDA.  Give them a follow on Instagram to see where they explore next @redfordtheredheeler 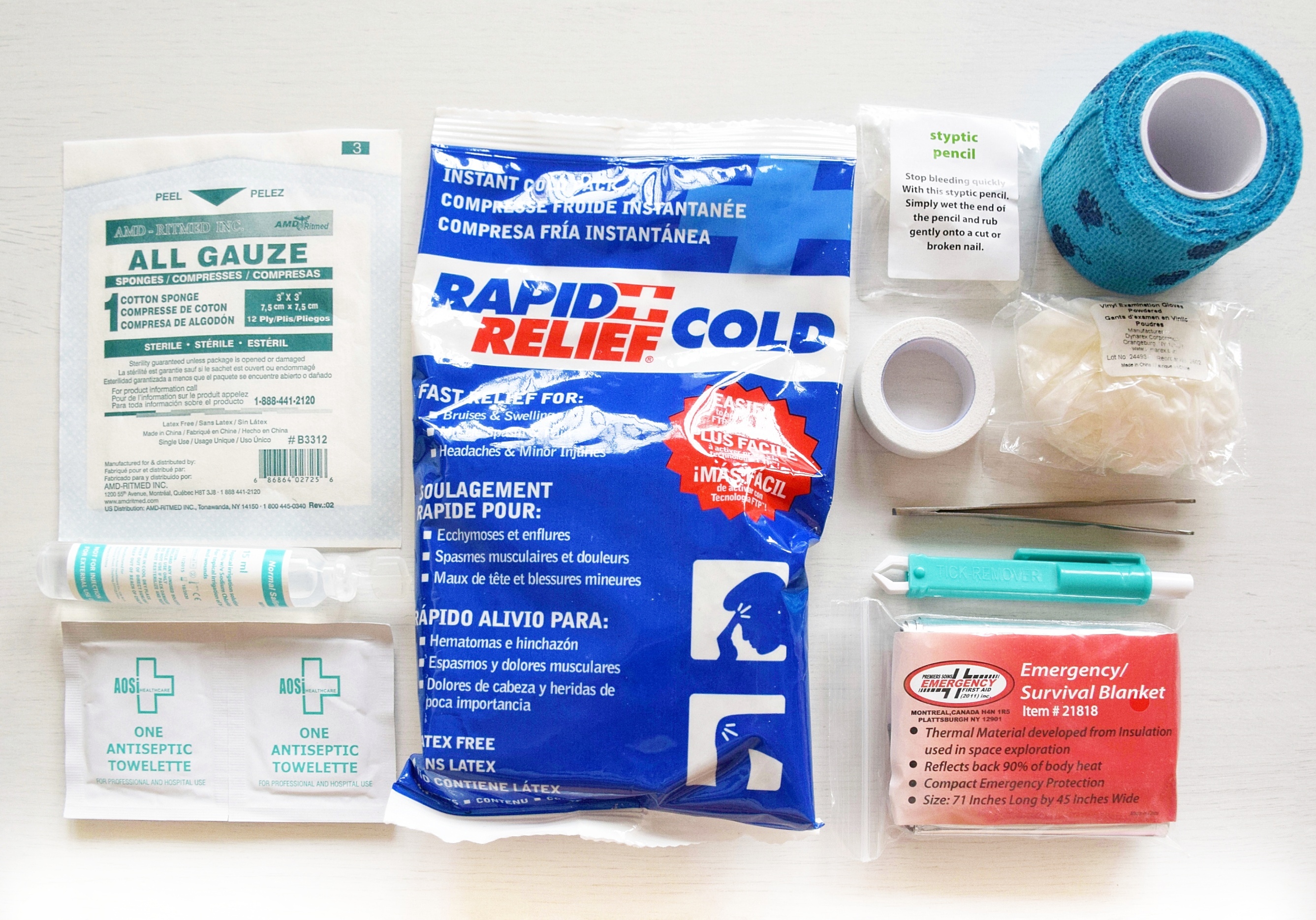 First Aid for Fido on the Trail 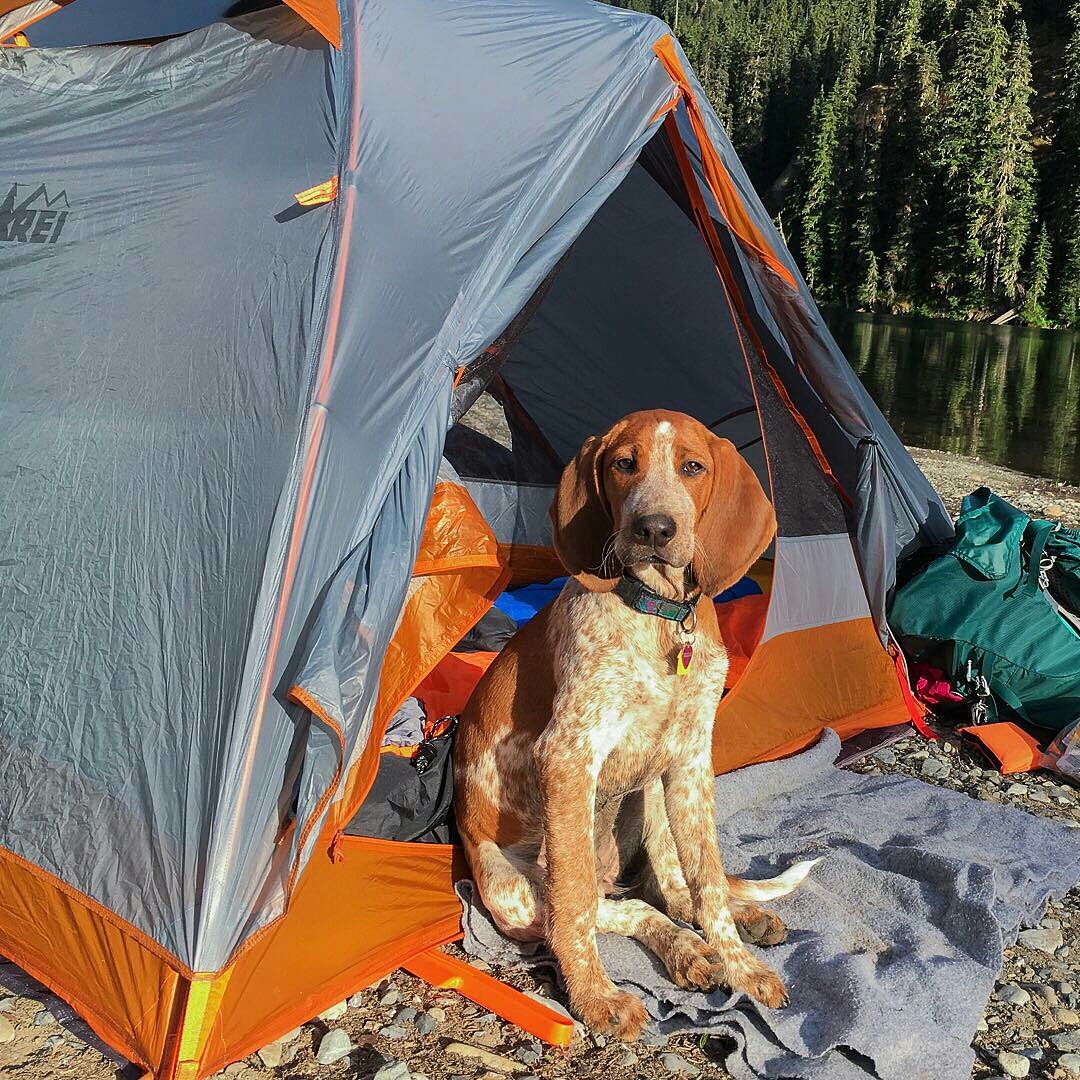 Backpacking With Your Dog