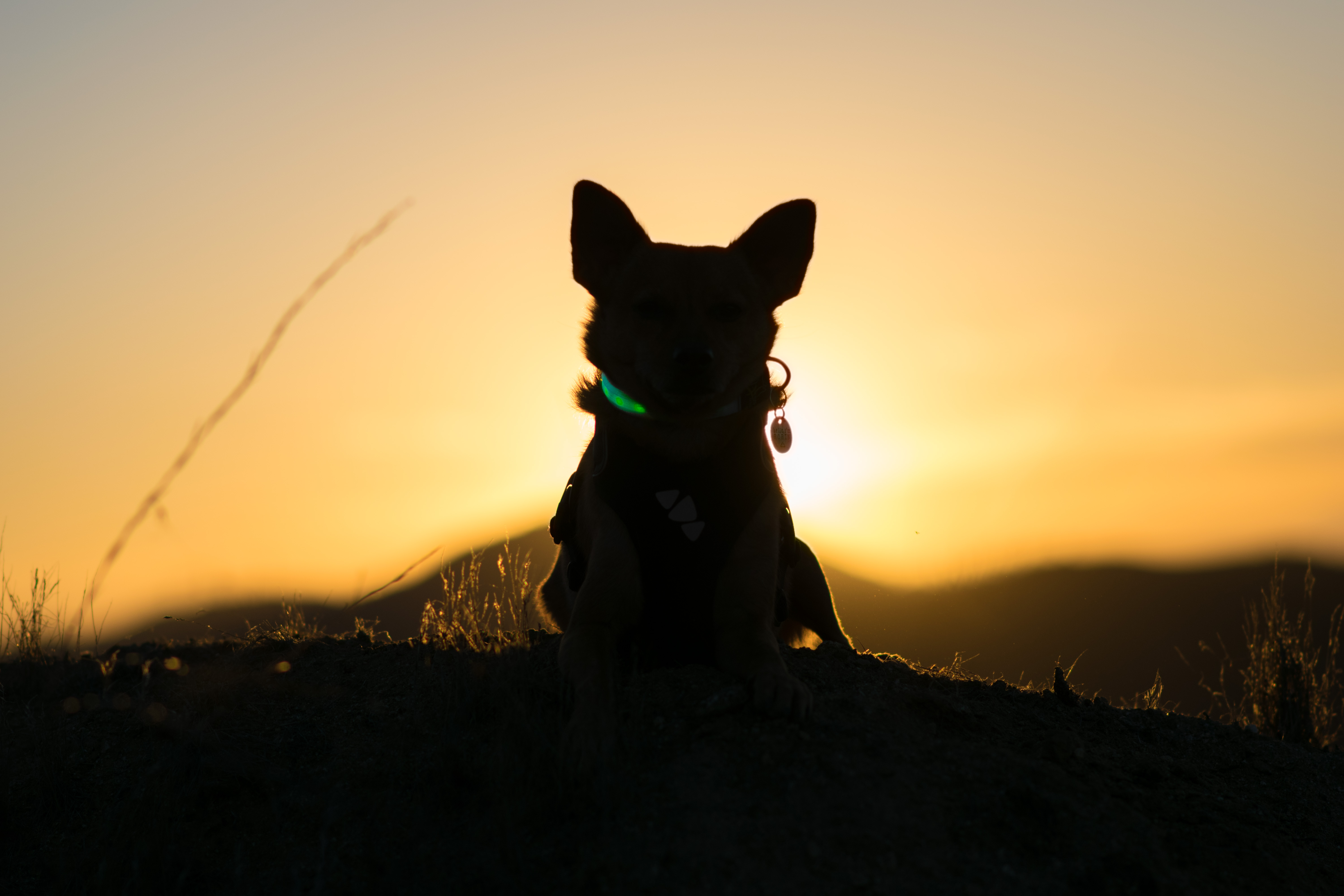 Normally, LED gear is a compromise and I often forego it, only to regret it when we get caught out after dark: our Alcott LED collar can’t be used with a leash, our dim eBay LED collars look too cheap to wear during the day, and clip on lights jangle around. Head-Lites are no-compromise LED wear. As standalone collars, they’re already great: reflective, sturdy, lightweight and attractive- but add the LEDs and they’re amazing – I don’t have to remember the light up collar because he’s already wearing it, yet the battery pack is so unobtrusive that I forget it’s even an LED collar.

We received two collars to test – the Head-Lites, which is mainly intended for 14″ neck sizes and up, and the brand new Low Beams, designed for 10-16″ necks.

A lot of thought went into the design of these collars. They’re sturdily constructed of three layers of webbing: a white outside layer through which the LEDs shine, a grosgrain ribbon that wraps over the edges, and a liner to sandwich the LED strip.  Both our Head-Lites and our Low Beams are reflective models, so the wraparound ribbon features a reflective stripe that has the added bonus of smoothing the edge, making it gentler on Robin’s delicate neck hair. The LED strips are removable and replaceable. Without them, the collars are flexible but still structured; with the LEDs in they are sturdy and a bit stiff, but not uncomfortable or constricting. The stitching is all impeccable; the collars, especially the Low Beams, are sewn so that there’s no puckering of the liner webbing when the collar is curved around the neck, and all of the seams are straight, even and well finished.

The most important difference between the Head-Lites and Low Beams is the size of the battery pack: the Head-Lites takes two AAA batteries while the Low Beams takes a 3V CR2032 button battery (or 2 CR2036). The smaller battery pack allows for a longer LED strip and has an extra advantage: while the Head-Lites has only an on/off switch, the Low Beams has four push-button settings (fast blink, slow blink, on, and off). However- and I’ll discuss this further below- the watch battery gives out less power than the AAAs, so there’s a fairly significant loss of brightness. Our Low Beams webbing has a slightly yellower glow as well, but it sounds like it’s just a result of that particular run of webbing.

The smaller battery pack on the Low Beams allows room for an adjuster, so the Low Beams styles are adjustable while the old Head-Lites for small necks were not. Additionally, the Low Beams only comes in white (which I’m fine with, as it feels brighter) and is a little narrower at 3/4″ wide, rather than 1″. I’m torn on this, because with Robin’s neck fluff the 1″ width works better to keep the LEDs from becoming obscured, but the 3/4″ width is definitely more comfortable as a general use collar on his neck size.

While our older style Head-Lites uses a plastic buckle to save weight (the size has now been converted over to Low Beams), all other Head-Lites and Low Beams collars use metal buckles, which I love – they’re nickel-coated aluminum, which is lightweight and shiny, and really adds to the overall look of the collar. Ours does have some pretty serious scratches, but I can’t figure out whether Robin put them there or not. I can’t imagine that he’d do so much damage to the buckle without damaging himself, and they’re still shiny, so I’m inclined to think they were a manufacturing defect. Either way, the buckle is super sturdy and the scratches don’t detract from it.

Head-Lites collars are 100% made in Canada (which is awesome) and both collars feature a little Canadian flag tag that glows red. It’s a cute touch!

Robin’s a 12.5″ neck, but I adjusted the collar to be just a bit larger to help it float on top of his fluffy neck fur. Obviously, if your dog is an escape risk, be cautious and make sure it can’t slip over the ears. The Low Beams are adjusted using a metal slider; there’s actually quite a bit of room for adjustment, but if I made it any bigger the excess strap wouldn’t reach the strap keeper. Bear in mind that while the collar can be made bigger, the LEDs don’t cover any more of the neck, so it’s best to buy a collar that’s the right size for your pup.

The Low Beams is a perfect fit for Robin – we’ve used it exclusively as his everyday collar since we got it. He’s never worn a collar in the house, so we do take it off at home so he can relax naked, but when we’re out it’s perfect – comfortable, sturdy, and good looking.

The Head-Lites is a great fit as well, but due to the larger battery pack, it wouldn’t be my choice as a general everyday collar. Robin actually wore it for three days straight on our desert camping trip and didn’t seem to mind, but apparently most small dogs dislike it. If you hunt with a small dog before dawn or do long-ranging activites in the dark, I could see Head-Lites making sense for small necks – otherwise, if you’re looking for a put-it-on-and-forget-it collar, the Low Beams is definitely the way to go.

The Low Beams style has worked really well for us – it’s versatile, light, low profile and good-looking, and it’s bright enough. I also really like the flash settings, which help save battery, and adjustability is valuable. But I do wish it were as bright as the Head-Lites! On our desert trip, we had him wear the Head-Lites just in case and he was visible from way farther away than he was supposed to go! The Low Beams are plenty bright for keeping track of him on the trail, but if he were heading out alone, I would want the extra brightness.

For us, the all-around versatility of the Low Beams wins out almost all the time, but if your pup’s neck is 14-16″, you’ll have to make a choice based on your level of nighttime activity. I’d love to see an in-between version – I don’t know anything about batteries or electricity, but I think a two-CR2032-battery pack would be a good compromise for bulk and brightness.

Our first Low Beams LED strip was a first-run and had connectivity issues, but our more recent green and white strips have been 100% problem free. We did also have an issue with our Head-Lites going out, but after the owner, Joanna, recommended putting a bit of folded paper into the battery box to wedge them down, it’s worked with no problems.

Neither of our collars has run out of batteries yet, but I opened up the battery compartments on both to see how it was done. It’s very simple – just slide the elastic band to the side, slide the webbing loop sideways off the battery pack (being careful not to put a strain on the connector) and for the old style, insert your nail into the little button on the end to pop open the battery compartment; for the new style, slide out the battery drawer.

Head-Lites are not inexpensive (although the exchange rate is great right now for Americans). However, while there are a lot of options out there for lights, this is the brightest and most visible we’ve found, in addition to being the best design by far. We have two clip-on lights that retail for $5 and $20, but because they jangle around when not in use, we don’t leave them clipped to Robin’s collar, so they’re never at hand when we need them. Additionally, we haven’t found them to be as visible as a collar because they tend to hang to one side or the other on a harness, or be hidden when he’s facing away. We had a short-lived generic LED collar, which was too dim to use on the trail and too flimsy to wear during daytime. Head-Lites are worth the price because they’re a great standalone collar design even without the light capabilities, making the hidden LED functionality the cherry on top.

The Low Beams has been our everyday collar – as in, I put Robin’s tag on it and he wears it exclusively- since we got it: it has no disadvantages over a regular collar and when we need it, the LED functionality is there. It’s plenty bright for dawn/dusk trail use, walks and nighttime fetch in the park, so I recommend it without reservation.

Head-Lites is best for: 10-16″ dogs with high levels of nighttime activity, small dogs who range far away, all necks 16″ or larger. 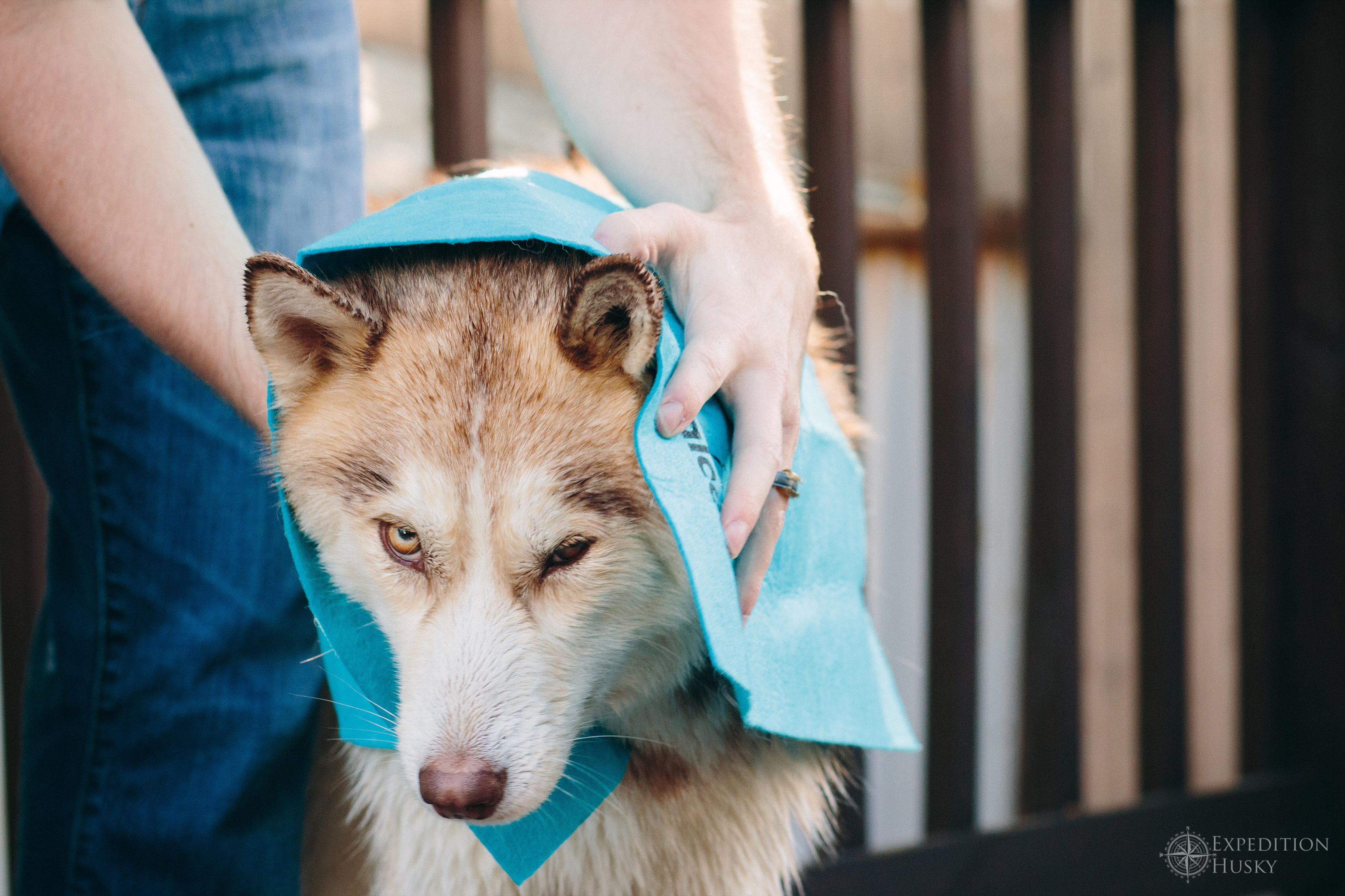 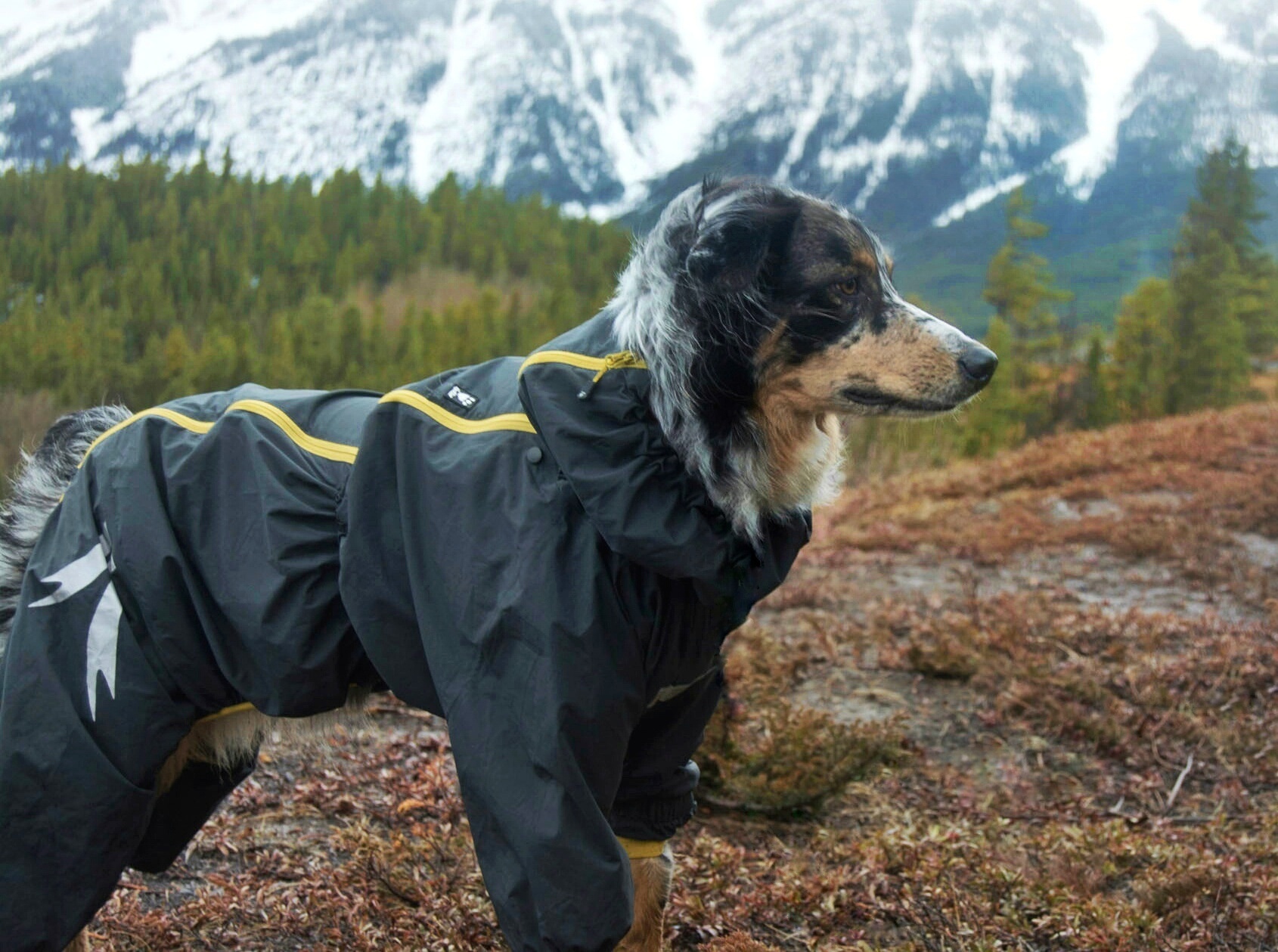 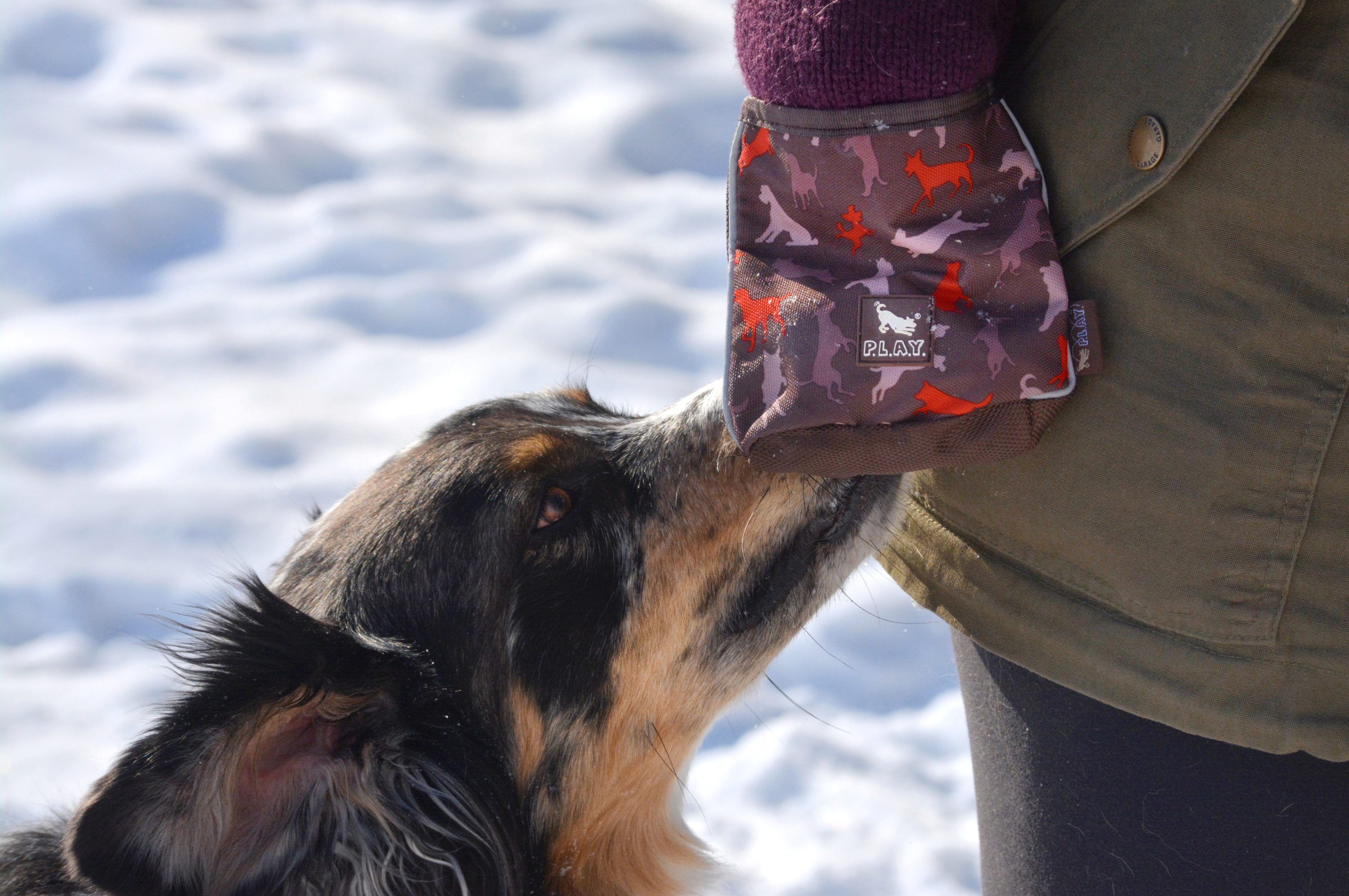