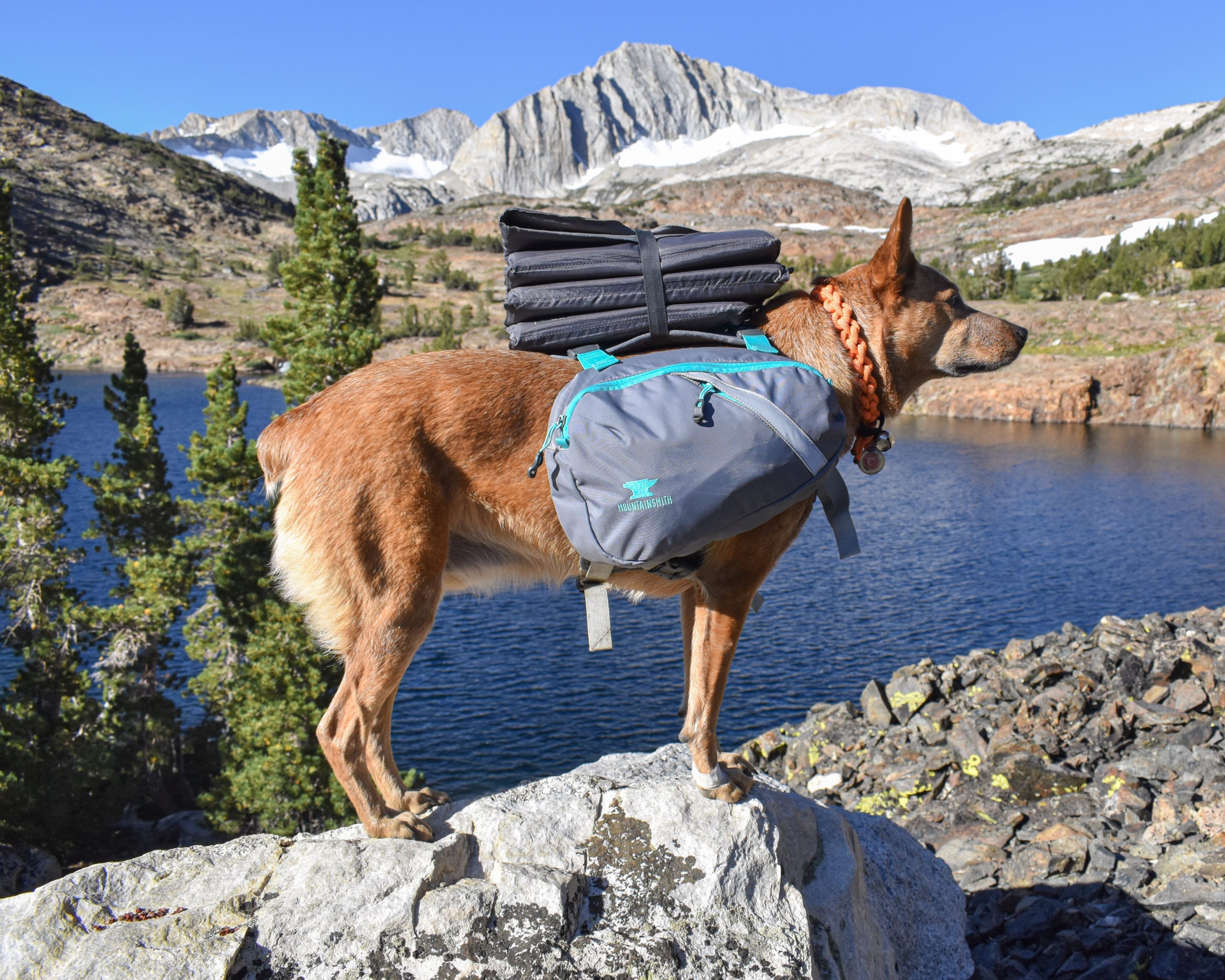 It might be the beginning of the off season to us, but to dogs it’s always the on season. Try telling them you can’t get out because of the weather, or work… yeah, that won’t translate to dog, Redford included.

Those of us who backpack will tell you lighter is better and if you don’t have to carry quite as much stuff to get out then you’re more likely to go. But we who adventure with our dogs end up carrying most of their gear along with our own and that can get pretty heavy. That’s where the Mountainsmith K9 Dog Pack comes in. This Veterinarian designed dog pack will help your dog carry their weight in more ways than one. And because Mountainsmith has been making dog packs since the early 1980s their time-tested expertise has brought us one of the best designed dog packs in the industry.

The K9 Dog Pack has been around for years and has recently been given an update both in aesthetic and function. The most noticeable update has been the color scheme. Mountainsmith offers this pack in blue and red colorways and both options are good looking and will wear well through time (read: they won’t seem as dated as Mountainsmith’s previous blue and red colorways).

The pack has a 4-point adjustable chest harness with a padded sternum pad, which offers a number of adjustment points to fit each dog’s particular proportions. The back pad of the pack also has adjustment points to allow the saddlebags (or panniers as Mountainsmith refers to them) to hang higher or lower from the dog’s shoulders and back to put the weight of the pack’s contents on the right area of the dog’s torso. If the bags are too high the pack will be more likely to shift from side to side – especially if the two sides aren’t evenly weighted – and too low will cause too much movement in the bags and will wear out your dog faster. With any dog pack the tops of the bags should not be any higher than the dog’s back and shoulders.

The sternum pad, the back pad, and the sides of the saddlebags that touch your dog’s body are all padded with EVA foam and mesh for comfort and breathability. EVA foam, or Ethylene-vinyl acetate foam, is a soft, elastic plastic foam that has a rubber-like consistency and is very durable. It’s widely considered a safer alternative to PVC and is BPA free. You’ve most likely encountered it in the midsoles of your hiking shoes and just like in your shoes, the foam padding in Mountainsmith’s pack will protect your dog from feeling hard or sharp objects in the pack while also being soft and flexible with your dog’s movement on the trail.

Mountainsmith states that this pack has an “ergonomically designed torso shape,” which refers to the shape of the saddlebags. They are smaller nearest the dog’s shoulders and front legs, and gradually increase in size as they reach the dog’s mid-torso. Dogs carry more of their body weight on their front legs, 60% while standing still, to be exact. Their front legs are also used for stopping their forward movement and absorbing shock. This is why their front feet are bigger than their back feet and also why any good dog boot maker will make specifically sized boots for the front and back feet of your dog.

The tapered shape of Mountainsmith’s saddlebags distribute their weight down the torso so that your dog isn’t having to carry all that weight directly on their shoulders, which could lead to injury over the long miles and rough terrain of backpacking. Mountainsmith’s K9 Dog Pack is the only dog pack I’ve encountered with this shape and it is indeed the most ergonomically designed pack in terms of canine physiology, and that is crucial when your dog is having to carry more weight.

Mountainsmith also gives you the liter capacity of each bag, a critical piece of information that is hard to get from other dog pack manufacturers. Liter capacity is the most common volume specification in the human backpacking sphere and it really helps knowing how much each bag can carry. Although the K9 Dog Pack doesn’t have quite the liter volume or is as lightweight as the Ruffwear Approach Pack, it offers more adjustability to each dog’s particular body. The Approach does not let you adjust the height of the saddlebags on the torso, which as stated earlier is vital to your dog’s comfort and longevity on the trail.

In addition to the detail Mountainsmith has gone to in designing the form and function of this pack, it also has a padded grab handle on the back panel along with a metal d-ring attachment for a leash or ID tag. One feature that was especially appreciated while in the backcountry was the reflective trim that Mountainsmith has put on the front, side, and back of this pack.

The pack is made of 420 denier HD (heavy duty) Nylon Rip Stop PU Carbonate and 630 denier Nylon PU Carbonate. That sounds pretty great and also pretty technical, so what does that mean to us dog owners? As explained in my review for the EZY Dog Element Jacket, I broke down what denier is and why it matters in fabric construction. But to summarize, a higher number means more durability with most backpacks ranging from 100-600d. The K9 Dog Pack is made of durable Nylon, with the outermost layer being a Heavy Duty Rip Stop Nylon. Rip Stop combines a grid of thicker thread into the fabric to stop the thinner threads from unravelling should the fabric become ripped or punctured. It’s commonly used in fabrics that will come into contact with rough and sharp surfaces. Rip Stop also helps with water resistance, but that’s icing on the cake considering that Mountainsmith has coated the nylon in Polyurethane (the “PU” from earlier), which helps protect the Nylon from abrasion and weathering, and makes the fabric extremely water resistant. The Carbonate adds to the Nylon’s density and strength. All that said, the fabric of this pack is made for the most rugged outdoor adventures you and your dog will have.

We used this pack on a three day backpacking trip with friends – humans and dogs alike. All the dogs wore packs and carried their own gear. Of the three different brand dog packs used that weekend, the Mountainsmith stayed in place the most. It remained even on Redford’s back while he was moving and when he needed to get up, over, and around some talus and scree fields we encountered. Redford’s range of motion was uninhibited in the K9 Dog Pack and I did not have to mess around with moving items from side to side to get the pack positioned evenly. That being said, you should always try to weigh out the items in each bag so that they can be as close to evenly weighted as possible.

The one thing I wished that Mountainsmith had added to this pack were some way to attach things to the outside of the pack. For instance, many people have their dogs carry foam pads like a folding Thermarest pad or in Redford’s case his Ruffwear Highlands pad and having some webbing loops on the outside of the pack would have been helpful in attaching it to his back.

Backpacking with Mountainsmith’s K9 Dog Pack Redford was able to easily carry all his own food and gear, minus his Whyld River sleeping bag. Which speaking of, Mountainsmith states that this pack can carry their compressible K9 Bed (in the size Medium and Large packs only). The pack comes in three sizes as stated by Mountainsmith: Small for dogs 20-50 pounds with small girth chests, Medium for dogs 40-90 pounds with medium girth chests, and Large for dogs over 80 pounds with large girth chests. Mountainsmith also gives the dimensions of the saddlebags in inches so you can measure them against your dogs side.

This pack will be great for dogs who are used to carrying weight and who need to carry a good amount of gear on backpacking trips. This pack would not be ideal for dogs who are not used to carrying additional weight while adventuring. As with any pack, be sure to slowly introduce your dog to carrying weight by gradually adding weight to their pack over time before they need to carry it all on a trek. We recommend that dogs carry closer to 10%-15% of their weight but at their healthiest, and with a lot of conditioning, dogs should never carry more than 25% of their body weight (don’t forget to include the weight of the pack in this calculation). Once that’s done your dog will be ready for adventure with Mountainsmith’s time-tested, ergonomically designed K9 Dog Pack. 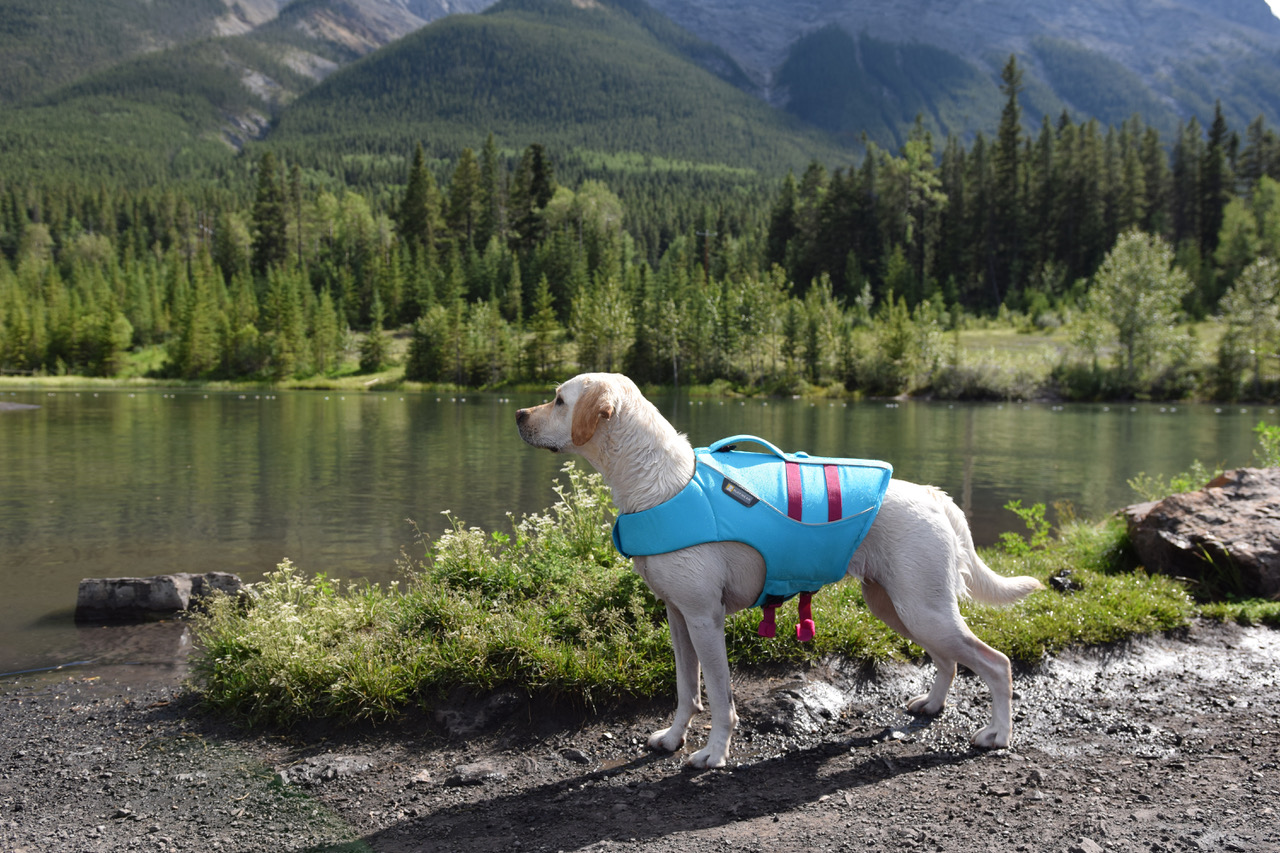 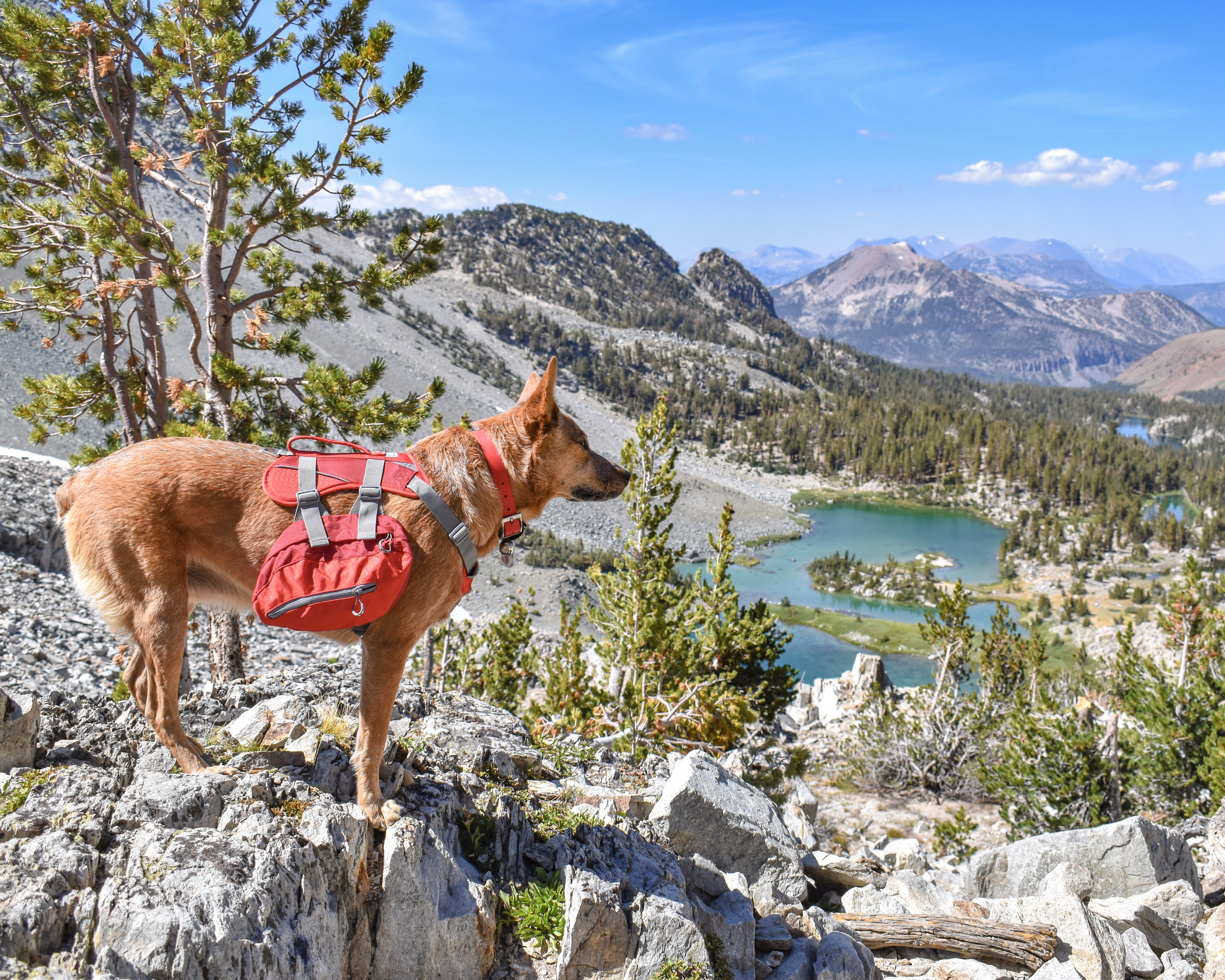 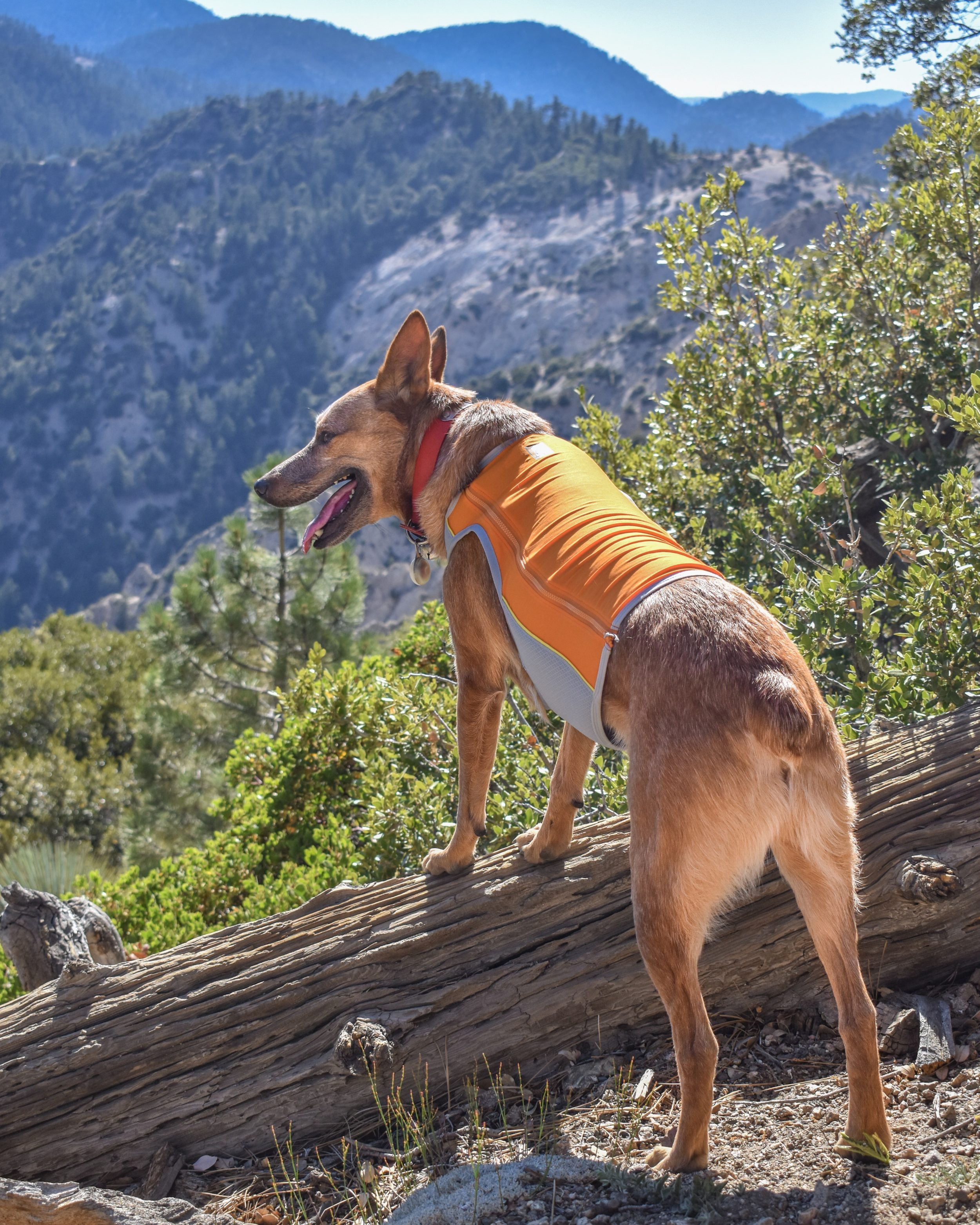